Guest Blog: Triplet Mom Plus One

Parents of Multiples, Attach Crib Tents For Peace of Mind and Sleep

When we went to Kings Dominion this past summer, our triplets knew just what to do for the bumper car ride because they have been doing just that in their cribs since they were very little, bumper cars with their cribs.

Bumper car cribs is a game our triplets played all of the time before they fell asleep and when they woke up. We first witnessed this game happening when we heard a lot of wall banging over the monitor. We had no idea what was happening but knew no one was hurt because of the squeals of joy coming through the monitor. When we opened the door, we witnessed them playing bumper cars with their cribs. So this is when we had to move the cribs a couple feet away from the wall and as far apart from each other as we could.

Their nursery parties have progressed from cooing and babbling while looking at each other through the jail like bars of their crib. Next came the crib bumper car game, and then the jumping, laughing, singing and dancing became the norm for their parties. Thankfully, during this phase of partying we had already attached the crib tents. Our daredevil son brought their parties to a new level when he began doing hand stands with his feet touching the top of the tent over his crib. It didn’t take long for his brother and sister to follow suit. Their cribs were now their personal moon bounce and tumbling gym. You would have thought that their crib mattresses were actually trampolines. Good thing they were contained with crib tents for these nursery parties or they might have seriously hurt themselves and each other.

The biggest thing I’m always protecting them against is each other. When they were little I would have to look at all of their toys and ask myself, “Can they use this toy as a weapon against each other?” It was a big job keeping them from biting each other; it made for a lot of fun times when I wasn’t able to keep them from doing this. All I’ll say is even in this past year after very few biting incidents for a year or so, out of nowhere one of our boys bit the other one in the chest to the point that he will probably forever have a bite scar and needed antibiotics in order for it to finally heal a month later.

They are one of the biggest dangers to each other. Just last week our youngest triplet threw his bat mobile at our 22 month old. This is my first experience with blood everywhere from an injury.I called my husband panicked while yelling at our son who threw the bat mobile at our baby. I was not handling the situation well. My husband right away responded to my hysteria on the phone and said he was leaving work right away to come home. Then I managed to take a breath, remembered what I have heard about heads bleeding a lot and carried our baby over to the sink. I performed my go to move for when they smear pancake syrup all over the heads and got the sink sprayer going, soaking his head. Then I could clearly see the tiny cut on his head. I called my husband back and explained it wasn’t as bad as I initially thought and that he didn’t need to come home. Of course this all had transpired as we were walking up the stairs to bed.So finally I was able to put our triplets down for the night and kept our baby up with me for a few hours to make sure he was okay. Thankfully he was.

Can you imagine what would have been happening in their bedroom if we had decided to transition them to big kid beds at two years old? I’m not sure exactly, but I do know it would have involved trips to the emergency room. The crib tents have been extremely helpful in keeping the triplets safe from hurting each other and themselves.

Thankfully we were able to hold off on transitioning them to big kid beds until they were three years old not only for their safety but our sanity as well. A couple of months after our triplets turned three we began phase one of transitioning them to big kid beds. We are now in phase three of the transition. I will write about this experience in another post. I will just say that currently, seven months later, for both nap time and bed time, we use a combination of bribing, rewarding and threatening in order to keep them in their beds and to be quiet and go to sleep.

I’ll use today as an example. They did take a three hour nap this afternoon, but only after many trips upstairs to their room first saying that they could have pumpkin pie after dinner tonight if they would please be quiet and take a nap. Our little girl was asleep within the first ten minutes of nap time. For the boys I then threatened to take away their lovies, next I took away their favorite lovies. Now two out of three were asleep and for the last one I went back to pumpkin pie bribery in addition to threatening to take away one of his costumes. Finally they all were asleep.

Are you exhausted reading that? Me too, my point is, parents of multiples do yourselves a favor and keep your kids safe from each other and put crib tents on their cribs and keep them in them until they are at least three years old.

I know I have said it is the little things that make the biggest difference. Well the crib tent may be a little thing, but it gives you another entire year before you would need to make the transition to big kid beds and all that comes with that transition for you and for them. 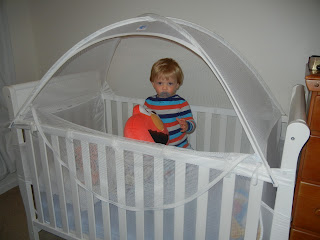 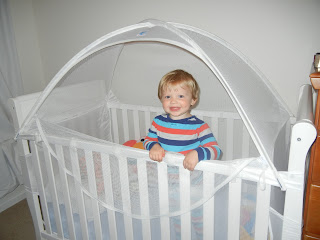 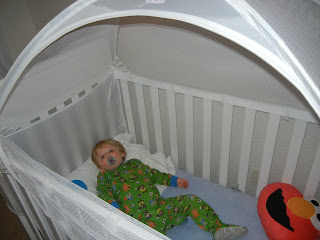 In case you are wondering, walls are white because we are renting our house